The majority of the feeds in the REVERDY feed range are complementary to forage. They are mixtures of raw ingredients, vitamins and minerals whose first objective is to provide the essential nutriments that are lacking in forage, thus meeting the individual nutritional requirements of different productions (muscular efforts, growth, lactation etc.).
Consequently, except for a few individual cases, the aim of our feeds is not to supply fibres because they are already present in forage. This chapter on fibres is therefore dedicated to the different types of forage available (grass, hay etc.) rather than the range of REVERDY feeds.

Horses have evolved for millions of years on vast grassy plains. Their digestive system has evolved by being in contact with this environment. A microbial flora has been progressively constituted, which allows them to use a high fibre diet. Over time horses have conserved this ability to digest important quantities of forage to cover their nutritional needs. Nowadays the feeding of high levels of cereals and complements with the aim of optimising growth and performance has too often led us to forget the importance of forage in the horses’ diet.

Plant walls are constructed from fibres resistant to the digestive enzymes produced by the horse.
We can distinguish two types:

The majority of plants represented in forage fed to horses fall into one of two different categories:

ATTENTION: At an equal development stage, legumes contain higher levels of protein, energy and calcium than grasses. Thus their distribution must be rationed.

The horse is a nervous and worrying animal that psychologically needs to feel satisfied. So feeding is an occupational and tranquilising factor.
A stabled horse can suffer from boredom for a good part of the day. This is a major cause of the appearance of general psychological disorders as well as troubles in feeding behaviour. Feeding forage is a very interesting way of combatting boredom especially when placed in nets. These latter oblige the horse to consume his hay little by little, blade by blade, which further prolongs ingestion time and as a result, the time he is occupied.

Inversely proportional to the digestibility (or the ferment ability) of fibres. Non-digestible fibres increase the volume of the digestive contents and thus stimulate intestinal peristalsis (=motility) and limit the risks of displacement or even twisting of the numerous intestinal loops.
It is therefore a primordial digestive health factor in the prevention of digestive problems.

The buffer effect of forage:
A key element in the prevention of gastric ulcers

Acid is continually secreted in the stomach of horses, regardless of whether they are, feeding or not. The high intrinsic buffer abilityof forage associated with the considerable production of saliva that their ingestion engenders allows a neutralisation of the acid attack.
Grass or hay produces twice the saliva of a cereal feed. If hay is not constantly available to horses, prolonged periods of fasting can occur, notably at night. Fasting leads to a rapid drop in the gastric PH and causes the gastric squamous mucosa to have lengthened exposure to the stomach’s acid contents. Continuous acidic secretions require continuous neutralization by bicarbonate rich saliva and the intrinsic tampon ability of fibre rich forage, and even calcium and protein for rich legume hay. So, when forage is lacking, the continuous acid secretions of the stomach are not tamponed and lead to the rapid drop in the PH: this can lead to ulcers forming in only a few days on the squamous mucosa. Furthermore, an empty stomach can favour gastric-duodenal refluxes which contain bile acid, which when associated with hydrochloric acid, are extremely corrosive to the non-glandular mucosa.

« Feed a horse is to feed his flora »

The horse is a non-ruminant herbivore or fermenter in the large intestine.
The large intestine has a capacity of about 125 litres and shelters milliards of enzyme producing bacteria and protozoa which contribute to fibre digestion (fermentation). These microbes are absolutely indispensable to the horse as he cannot produce the enzymes without them. In return, the ingestion of fibre by the horse is indispensable to the hind gut micro-organisms.

Furthermore providing fibre maintains a beneficial bacterial population which prevents the proliferation of other bacteria potentially dangerous to the horse.

The nutritive value of forage is determined by:

The horse is able to digest practically the totality of forage cell contents, whilst bacterial fermentation can only digest 50% or less of the cell walls. Thus forages represent an often neglected energy source in horse nutrition, as energetically, 2 kg of good hay = approximately 1 kg of barley. This is possible because the microbial flora in the hind gut is capable of producing volatile fatty acids by the fermentation of large quantities of fibre. These volatile fatty acids are able to be used as a source of energy throughout the dayas ferment reactions continue a considerable time after ingestion of a ration.

As we have explained, horses are fermenters in the large intestine. Therefore any feeding programme that neglects fibre will have undesirable consequences.
Furthermore horses that receive fibre deficient rations will become at worst wood eaters, real 500kg termites capable of destroying the separations and doors of their stables.

Ideally for stabled horses, forage should be distributed ad-lib in the form of grass hay. If this is not possible the following is suggested:

NB: Apart from a few cases of horses suffering from chronic digestive disorders (adhesions, perturbed microbial flora with aerophagia, ballooning, etc.), straw is readily accepted by horses if they have constant access. Inversely, if they have only punctual access they can go at it with voracity and declare colic due to an impaction of straw in one of the loops of the colon.

However good health of the horse being directly related to receiving sufficient fibre, we recommend feeding at least 1.5 kg of hay per 100 kg live-weight per day, thus a minimum of 7.5 kg of hay for a 500 kg horse. 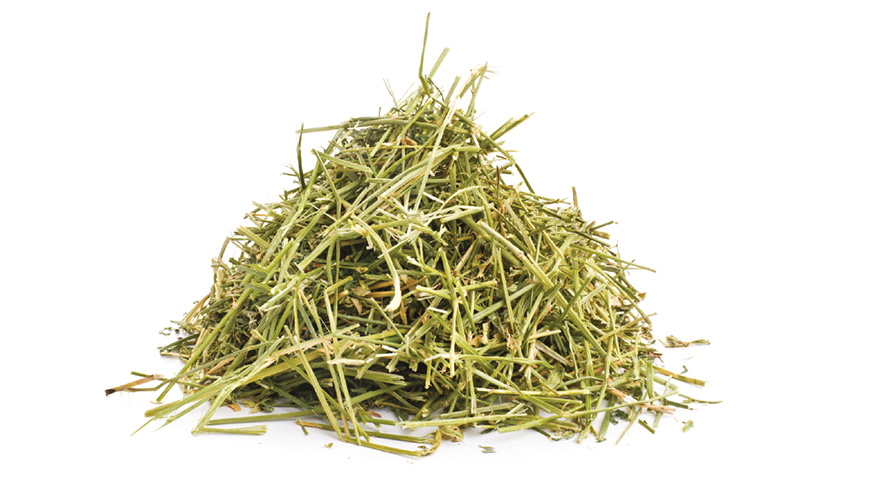 This is an extremely high quality product composed from additive free, dehydrated, chopped, and compacted grass. Not only practical, this presentation allows fibres to be added to the concentrate feed. This practice is of interest at several levels: 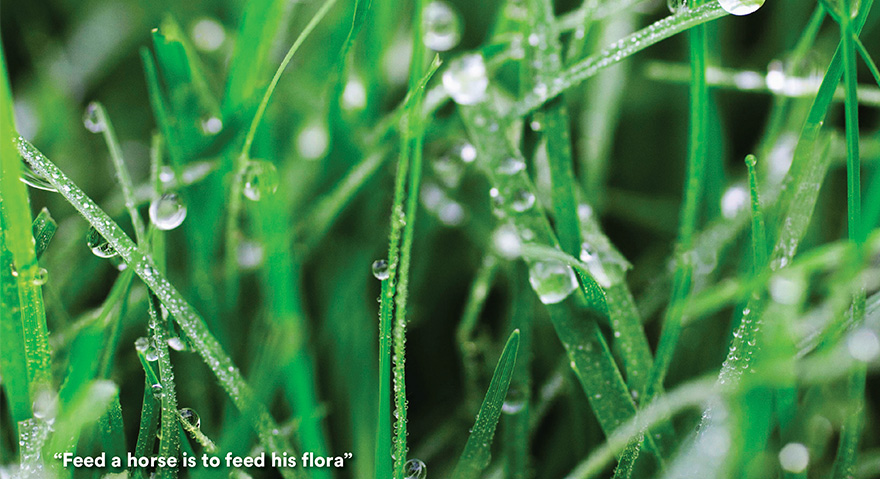 Grass production is very unequal and adjusts badly to the requirements of the horse.

It is in constant evolution and passes by an optimum fleeting.
The young spring grass can be problematic at several levels:

It is not surprising that in regions where young grass generously unites these elements (for example the Pays d’Auge valley in Normandy, France) that horses lose condition when first turned out.

Inversely very mature grass is rich in insoluble fibres, so not very digestible while also being largely impoverished in protein, phosphorus, trace elements, carotene etc. Even at the most desirable stage of growth heading of grasses, and flowering for legumes) the composition of the grass is tributary to its botanical nature, the climate, and the quality of the soil. But systematically it appears deficient in at least sodium, zinc, copper, if not in iodine and selenium.

Thus we should not be surprised by frequent alterations in mare fertility and bone development in youngsters, etc.