Internal parasites: are you up to date?

Why is the management of internal parasites so important? Gastrointestinal parasites in horses have a direct bearing on their health and depending on their pathogenicity and the level of infestation, can cause (severe) clinical signs such as colic, diarrhoea, weight loss, stunted growth, reduced performance and a weakened immune system, to name a few. Our knowledge of equine internal parasites has grown. But when it comes to managing them: are we up to date?

What about managing the environement?

Over the past two decades, our knowledge and understanding of internal parasites in horses has evolved considerably.

Previously, the trend was to try to completely eliminate gastrointestinal parasites in horses, which involved treating all horses (in a herd) at regular intervals (e.g every eight weeks), with a seasonal rotation in the choice of wormer. These traditional practices were extremely effective in controlling the most common parasite at the time, Strongylus vulgaris, which can cause verminous arteritis, for example.

However, these traditional practices also led directly to worms becoming resistant to chemical wormers (anthelmintic resistance), and also led to a change in the pathogenic worms found in horses today.

Because, firstly, it should be noted that the traditional interval and treatment of all horses creates strong selection pressure on worms for resistance to anthelmintic drugs (wormers) - and once resistance is present in a worm population, this does not appear to be reversible.

It is important however to be aware that resistance to wormers is highly variable from yard to yard, even within the same region, and therefore one cannot conclude that a given population of horses is resistant without specific and appropriate testing.

Next, traditional worming methods have also led to a constant evolution of the worm population, so that today the main pathogenic worms in adult horses are small redworms* (Cyathostomin) and tapeworms (Anoplocephala perfoliata). Large redworms (Strongylus vulgaris) are no longer as common, while roundworms (Parascaris equorum) are the main problem in young horses. 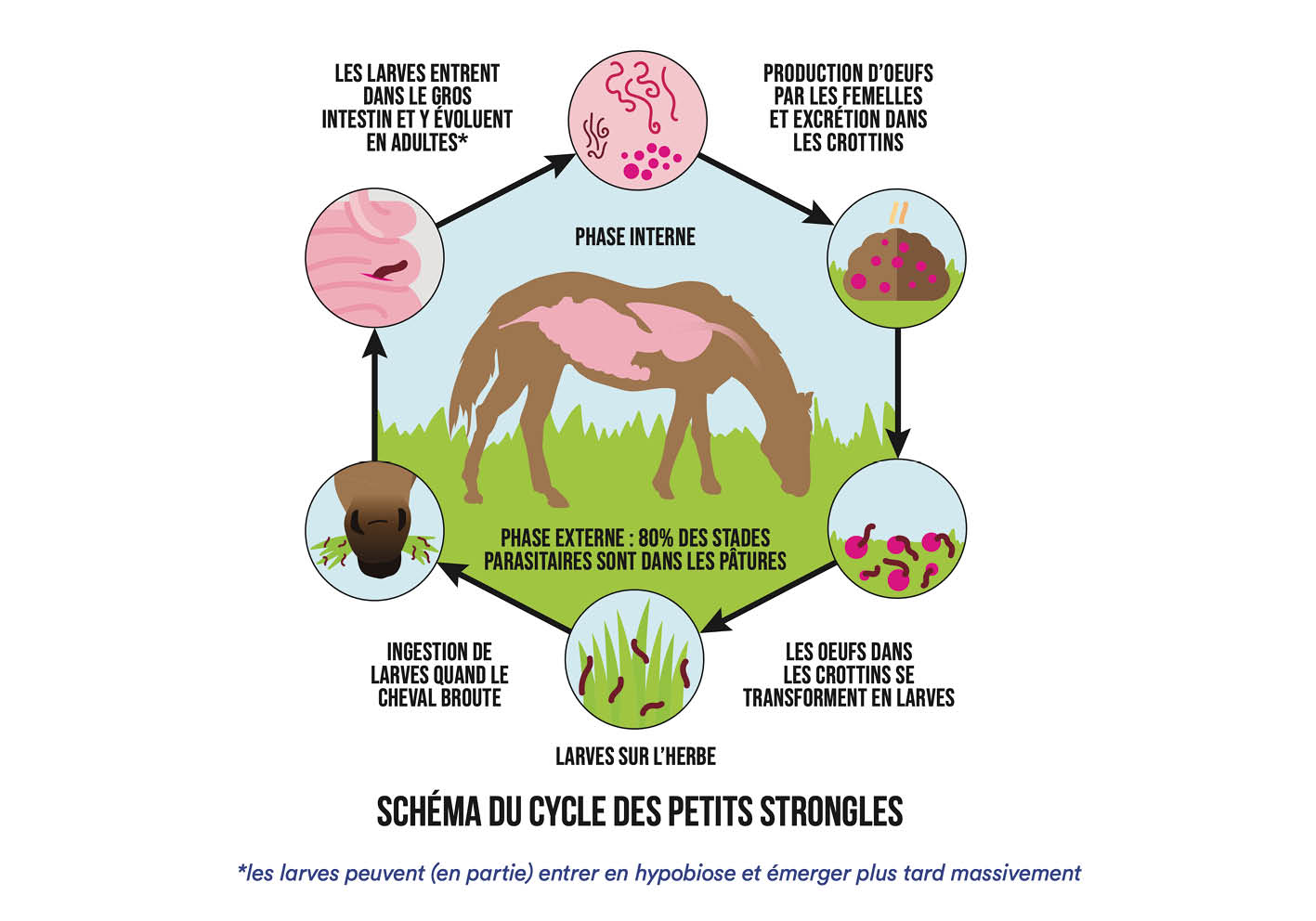 ✅ Beyond these changes related to traditional worming practices, there have been developments in our knowledge about equine internal parasites:
• The ability of the horse's immune system to fight worms varies from one individual to another ;
• Up to 80% of worm eggs are excreted onto pasture by only 15 to 30% of horses in the same herd ;
• The shedding of parasite eggs by a horse is very stable over time (that is to say: a healthy horse with low egg shedding will always tend to have a low shedding, and vice versa for a horse with high shedding) ;
• The development of new treatment solutions is almost non-existent: no new category of treatment has been put on the equine market for more than 25 years.

However, it is neither possible nor desirable to have worm-free horses...
The objective should rather be to minimise the contamination of pasture by parasite eggs.

Rational worming should be undertaken, a concept that attempts to strike a balance between:

A faecal worm egg count consists of counting worm eggs in the droppings under a microscope and determining a number of eggs per gram of dung (EPG). Depending on the level of parasite infestation, a decision is made whether or not to worm the horse.

Recently, an automated counting system for faecal worm egg counts has been developed. So far the system has only been used in the USA, and commercialised at the end of 2021. The automated count has been shown to be far less variable and more accurate than faecal worm egg counts carried out by the traditional method; the system produces an image of parasite eggs and provides results in eggs per gram (EPG) for both strongyles and ascarid eggs.

Automated counting is quick and easy and can further contribute to a rational worming practice.

At the Equine Nutrition Research Centre of the Haras du Reverdy, we are the first in Europe to use automated counting, because the management of internal parasites is one of our main concerns, and one of our research interests.

On the other hand, faecal worm egg counts only give information at a given moment. They reflect the level of parasite shedding, not the actual infestation of the horse. They do not take into account all types of worms, nor the larval stages “encysted” in the intestinal walls. Ideally, 3 faecal worm egg counts should be performed per year: late spring, late summer and autumn. These will allow, among other things, to target individuals that are “high shedders” and to develop a targeted worming strategy with your vet.

However, as we have seen previously, anthelmintic resistance is increasing, and this level of resistance varies from yard to yard. Therefore, when worming, you may wish to consult your vet to carry out a « resistance test », or « efficacy test ». 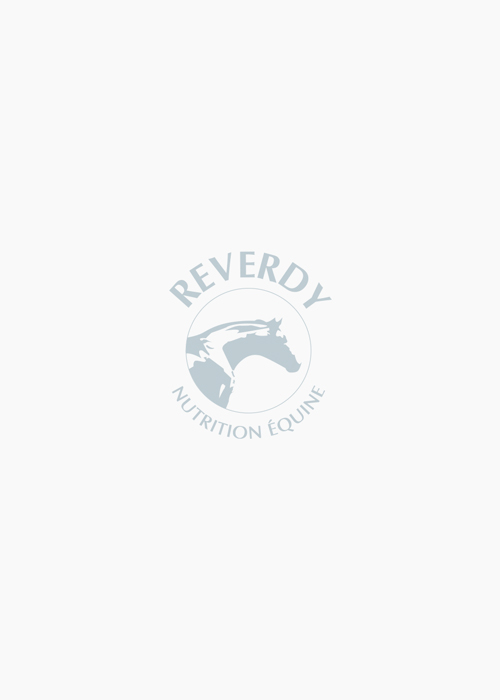 This test can be done every 2-3 years in every yard (for small redworms and also for roundworms in young horses). It provides specific information about anthelmintic resistance on your yard. The old concept of wormer rotation is no longer relevant!

✅ When worming adult horses, the following principles should be taken into consideration:
• Do not underdose with the wormer (estimate correctly the weight of the horse) ;
• Concentrate worming during the "peak transmission" seasons (usually spring and autumn) ;
• Worming all horses once or twice a year will be sufficient to control large strongyles ;
• A single annual treatment (in late autumn or winter) against tapeworm, is beneficial for the majority of animal ;
• Consider including an effective treatment for encysted Cyathostomins (small redworms) at a time when the mucosal parasite load is at its highest, typically in the spring.

All other treatments should target horses that are high "shedders" of eggs, as identified by faecal worm egg counts.

Horses under 3 years of age require special attention as they are more susceptible to worm infestation and more likely to develop disease. During their first year of life, foals should receive a minimum of 3 to 4 anthelmintic (worming) treatments, one of which should target tapeworm, for example, in the autumn, and then monitoring by faecal worm egg counts is recommended, as well as a control of the effectiveness of the treatment (effectiveness test).

Newly weaned foals should be put on the "cleanest" pastures, where the parasite load is the lowest. Yearlings and two year-olds should continue to be treated as animals carrying a high internal parasite load and receive approximately three treatments a year with effective wormers and faecal worm egg count monitoring as well.

Managing the environment: an often neglected aspect! More than 80% of the parasite load is found in the environment! In order to limit the contamination of grazing land, here are some recommendations:
• Pick-up droppings (manually or with a manure vacuum) twice a week during the grazing season. This is the most effective of all possible measures!
• Spreading: possible after composting (>40°C for at least two weeks) and turning the swaths
• Avoid overgrazing (paddocks!) and favour co-grazing with ruminants
• Mow or harrow pastures where horses have grazed in hot, dry weather (>30°C)
• Make up grazing groups: Favour the cleanest pastures for youngsters (the adults pass after the young)
• Do not top/harrow in wet weather (larvae are spread all over the pasture)
• Grow crops on paddocks to alternate with grazing
•Do not change horses from one paddock to another after worming if there is resistance to the wormer.

✅ TO REMEMBER
Our knowledge about the worming of horses has evolved. We recommend that you consult your veterinarian to draw up an annual worming and monitoring plan specific to your horses. And don't forget to take the horse's environment into account!