Before addressing the horse nutrition, it is first necessary to focus on the functioning of its organism. The understanding of its digestive peculiarities, the growth of the foal or the muscular physiology of the horse at work is an essential prerequisite for the development of a balanced diet. 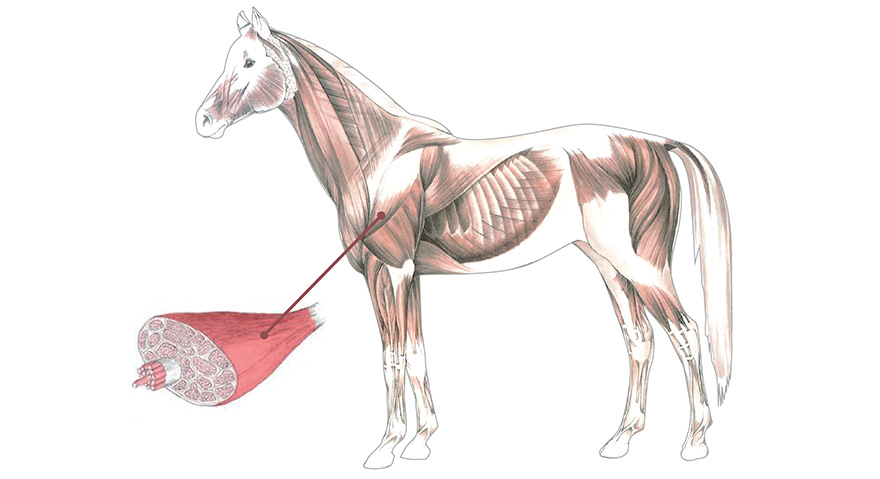 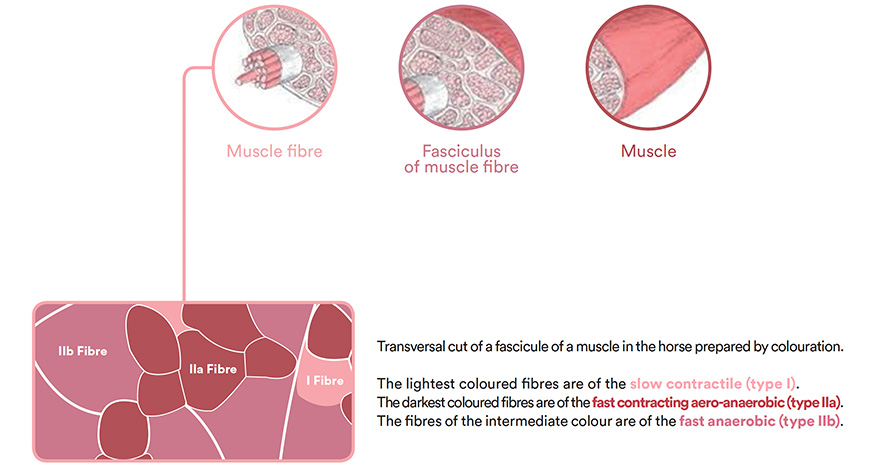 These fibres have great ability to use oxygen (aerobic) and have a good energetic yield : The combustion of substrate (lipids) is complete, without waste.

The preferred use of lipids spares glycogen and bestows an aptitude for prolonged effort. These fibres do not tire easily but the speed at which they contract is slow which limits the intensity of work produced. Therefore they are used in priority at walk and are suited for endurance (long, slow) efforts.

Intermediary they contract rapidly but are fairly economic in glycogen (good aerobic metabolism). The burning of carbohydrates is more or less complete without accumulation of lactic acid.

The energetic yield is excellent (moderate heat loss). They are suited to intense prolonged efforts such as long sprints.

These fibres are responsible for the maintenance of speed (staying power) and are of primordial importance to thoroughbred and to French trotter running capacities over classic distances of approximately 2,500 metres.

A large quantity of glycogen is burnt but with more or less total absence of oxygen (anaerobic).
Thus combustion is incomplete and results in the production of lactic acid which accumulates in the muscle cells.

However given that these fibres are the largest in size and their contractile speed are very fast, they are ideally suited to efforts requiring power and short sprints. These fibres are largely responsible for innate speed and are determining factor in the quarter horse, racing over 400 metres.

Work of muscles depending on the pace

Provide horses training at fast walking pace with lipids (endurance horses).
Fast walking is useful when reintroducing overweight horse into work.
It is of equally benefit to the osteo-articular system, unsolicited for a certain period.

At trot and canter

A part of the ration should provide lipids; they will be used principally the days of quiet exercise (slow and moderate speed). They allow a partial sparing of muscle glycogen reserves for those days of intense exercise.

Importance of starch being present in the ration as it represents a choice energy source for the synthesis of glycogen. 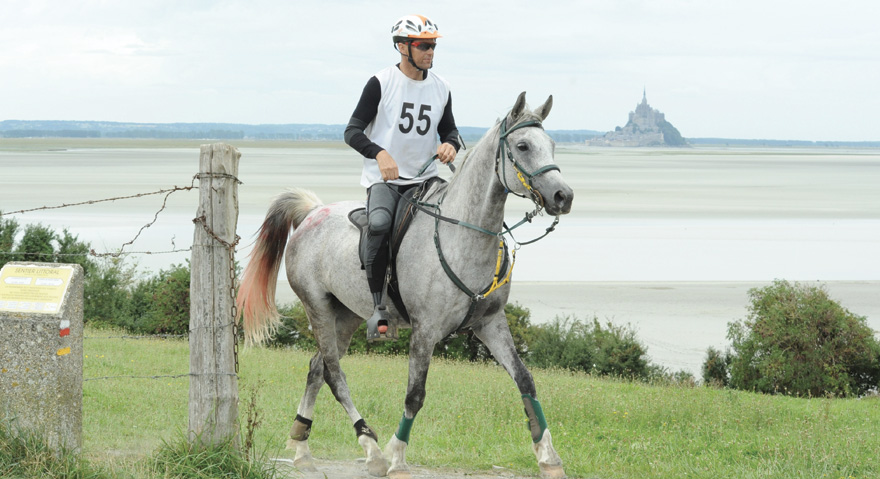 Work of muscles according to the discipline

Low use of muscular glycogen = the rest of required energy is produced by fat oxidation.

When speed increases, the use of muscular glycogen equally increases.

From a certain speed (see the curve) the majority of energy production can no longer be assured aerobically: the horse reaches his « anaerobic threshold » or « fatigue threshold ».

From this point onwards an important place is held by anaerobically produced energy, from where, there is an exponential increase in the use of glycogen and an accumulation of lactic acid. The horse enters into the « red zone ».
Following this, muscle tiredness is rapidly felt: the effort cannot be sustained for a long period.

The brutal increase in the consumption of glycogen is caused by the recruitment and use of an anaerobic metabolism which has an energetic yield 12 times inferior of that of the aerobic metabolism. The result is the production of a waste product responsible for the appearance of muscular fatigue: lactic acid.

This shows the amount of muscular glycogen used per minute according to the speed of the horse. This data was collected after different races (averages).

Note that providing the horse stays below 39km/h (1min27 sec per km) very little glycogen is used. However, as speed increases the horse approaches his « anaerobic threshold ». From this point onwards glycogen is consumed in an exponential way.

The authors have shown that the performance of American trotters running mainly over 1,600 meters is correlated to the distribution of type II muscle fibres.
In effect, the best horses in the study had a greater proportion of type IIa muscle fibres.