The choice of the raw ingredients used to compose our feeds is above all based on QUALITY and FOOD SAFETY.

As our desire is to produce healthy feeds for your horse, this is a coherent thought process. The first objective is to provide the horse with all necessary nutriments throughout his life, while preserving his gut micro-organisms and limiting the production of metabolic waste (lactic acid, urea, etc.) that can overload the organism (liver, kidneys, etc.).

In France, barley and oats, associated with forage, are recognised as being the basis upon which horses are fed. These cereals are rich in starch, an essential nutriment for the metabolism of energy in the horse (see the chapter concerning « Starch »).
Furthermore the characteristics of their starches (amount in the grain and digestibility) complement each other.

A soft grain that has a relatively high oil content (5% crude), and more precisely, rich in omega 6s, an essential fatty acid favouring skin integrity and a shiny coat. Oats are fairly rich in cellulose (12% crude) and contain relatively little starch (36% crude), although it is highly digestible.

To sum up, oats expose less to overfeeding and cereal indigestions, which can lead to complications in the large intestine (digestive acidosis, etc.) than with other cereals. However, the very high digestibility of oat starch confers a high glycaemic index.
Consequence, oats must be fed in moderation, otherwise the horse can be exposed to pathological states related to and/or aggravated by a high glycaemic index: gastric ulcers, laminitis, tying up, obesity, behavioural problems (excitability, etc.), hormonal problems (equine metabolic syndrome, Cushing’s Disease, etc.), osteo-articular problems during growth (OCD, etc.), etc.

This has always been the basis upon which horses have been fed in Middle Eastern and North African countries; the vigour of Arabian horses cannot be denied.

Barley is a hard grain, relatively low in fibre (4.5% crude). In parallel it is therefore essential to provide large amounts of forage (hay, straw etc.). It is rich in slow releasing starch (52% crude) which explains why its glycaemic index is lower than that of oats. Thus, if a suitable amount is given per feed (no more than 2kg of barley per feed for a horse of 500kg), barley allows us to provide sufficient carbohydrates for energy production without perturbing the digestive system and the metabolism of the horse in its entirety.

Characteristics of barley and oats used

All the cereals we employ are of French origin, and the use of locally produced cereals is privileged.
This has many advantages:

They are selected using strict specifications. Notably the cereals must reach a minimum specific weight* and the dry matter must stay under a certain threshold.

Used since a long time in America where it produces excellent results.

Maize is a hard grain, low in cellulose (2% crude) but very rich in starch (64% crude) of which the digestibility is intermediary compared to barley and oats. Maize is also very high in energy and of interest for horses in work. Nevertheless, it must be used in moderation; otherwise, we expose our horse to digestive and metabolic complications.

Flaking consists of flattening and steam cooking the grains which leads to a hydration and a partial pre-digestion of the starch (=gelatinisation). This increases the digestibility of the starch which is interesting in certain cases (see the chapter concerning « Starch »).

We use French produced, non-genetically modified (guaranteed to 99.1 %) maize. Furthermore, we select Waxy variety which starch is naturally very digestible because deprived of amylose.

Alfalfa is an interesting forage, it complements cereals. Being rich in fibres, proteins and in calcium, alfalfa makes up for the deficiencies found in cereals.

Furthermore, because of its intrinsic tampon ability (= capacity for neutralising acid), it can seriously limit the risks of acidification of the digestives contents (above all in the stomach) that can be caused by cereals.

We advise against the feeding of alfalfa/lucerne hay alongside our feeds as they already contain good quantities of alfalfa.

We use French produced alfalfa. Its guaranteed crude protein level is 17% of dry matter.
Furthermore, it is a dehydrated alfalfa made especially for horses, guaranteeing negative anti-doping controls (Systematic testing for morphine derivatives using the ELISA test).

Linseed is a valuable source of fats and oils (32% crude) of which over half are from the Omega 3 family. family. Thus, its use in horse nutrition guarantees a balanced supply of essential fatty acids (omega 3/omega 6 ratio), the assurance of a healthy diet.
Thermal extrusion is a succession of important compressions and decompressions of the seeds which are brutally raised to a high temperature over a very short space of time. This procedure has many advantages:

We use linseed produced in France and the United Kingdom. EIt is treated in a factory located in western France holding the « Bleu, Blanc, Coeur » label: this label brings to the fore the use of omega 3 sources in animal diets. The linseed is thematically treated using a patented process, seed by seed. Our supplier guarantees us a minimum level of total omega 3s of 160 g/kg of dry matter. 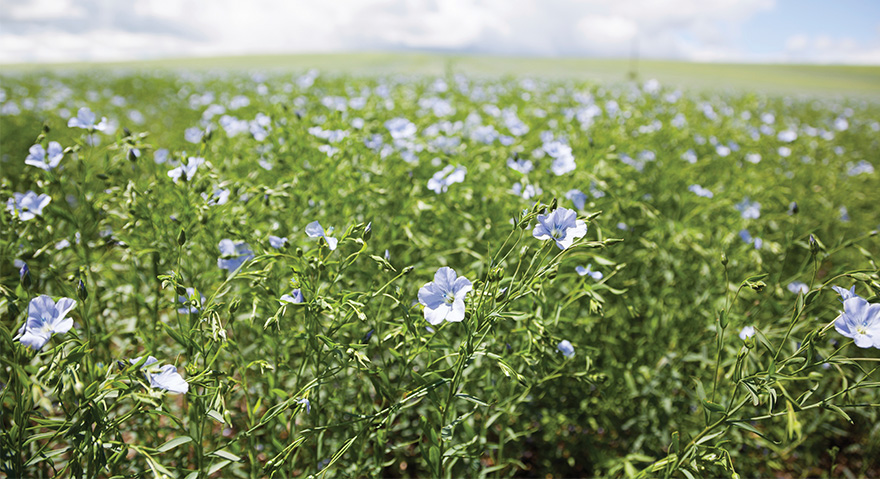 Soya bean meal is a concentrated protein stemming from the de-oiled soya-bean. Because of its richness in essential amino-acids, notably lysine and threonine, it is one of the best plant protein sources on the market. Consequently, it compensates for the deficit of essential amino-acids in cereals, this is of major importance in not only the athletic horse but equally in growing youngsters and lactating mares whose digestible protein requirements are significantly increased.

The soya bean meal we use is 100% French, it is produced in a factory based in the Grand-Ouest from grains harvested in France. So, it is non-genetically modified (guaranteed to 99.1 %) soya bean meal with a guaranteed crude protein + fat level of 48%.

Just like soya bean meal, the whole grain is an important source of proteins (35% crude), rich in essential amino-acids (notably lysine and threonine). However, by undergoing an extrusion process, the proteins in the beans are more digestible and so, better assimilated by the organism.

Furthermore, the soya beans conserve all their fats and oils (20% crude). Compared to refined soya oil (see the chapter concerning “By-products”), extrusion is a procedure that conserves the nutritional qualities of oils whilst liberating them from cells of the beans, allowing better use of them by the organism.
Also, Soya beans contain high levels of omega 6s. They are thus of interest by being complementary to linseed.

Finally, extrusion neutralises the anti-nutritional factors (antitrypsic factors) and oxidants (lipases and lipoxydases) naturally present in the beans permitting the animal to safely consume them.

We used French grown, non–genetically modified soya-beans (guaranteed to 99.1 %) They are processed in a factory located in western France and are thematically treated using a patented process, bean by bean.

Skimmed milk is the best protein source used in our feeds (extremely rich in essential amino-acids). It is also a source of lactose. Thus, its use is very interesting in young growing foals, permitting coverage of their high protein requirements and the transition from maternal milk to vegetable dietary sources.

The use of skimmed milk is equally of interest for increasing muscular mass, not only in the young growing horse but also, in the adult horse.

We used skimmed milk produced in West France. it is of « Food » quality, which means that it is fit for human consumption..

Chicory pulp is also rich in quality soluble fibres. These fibres reinforce the security of the digestive system and provide an alternative energy source to carbohydrates and lipids.

We use chicory pulp produced in France and Belgium. It is produced by drying at low temperature which strongly limits denaturalization of the pulp.

Carrots are very appetising, encouraging eager consumption of the feed. This is a very important point for those horses in very hard work that are fussy feeders, or in the horse convalescing after surgery. Furthermore, their richness in soluble fibre assures good digestive health.

Finally, carrots also represent an important source of beta-carotenes, precursors of vitamin A.

We use and select carrots produced in the European Union. They are transformed by a French company (in the West of France) where they are washed and sliced into cubes before being dehydrated. They are of « Food » quality and guaranteed non–genetically modified (to 99.1 %).