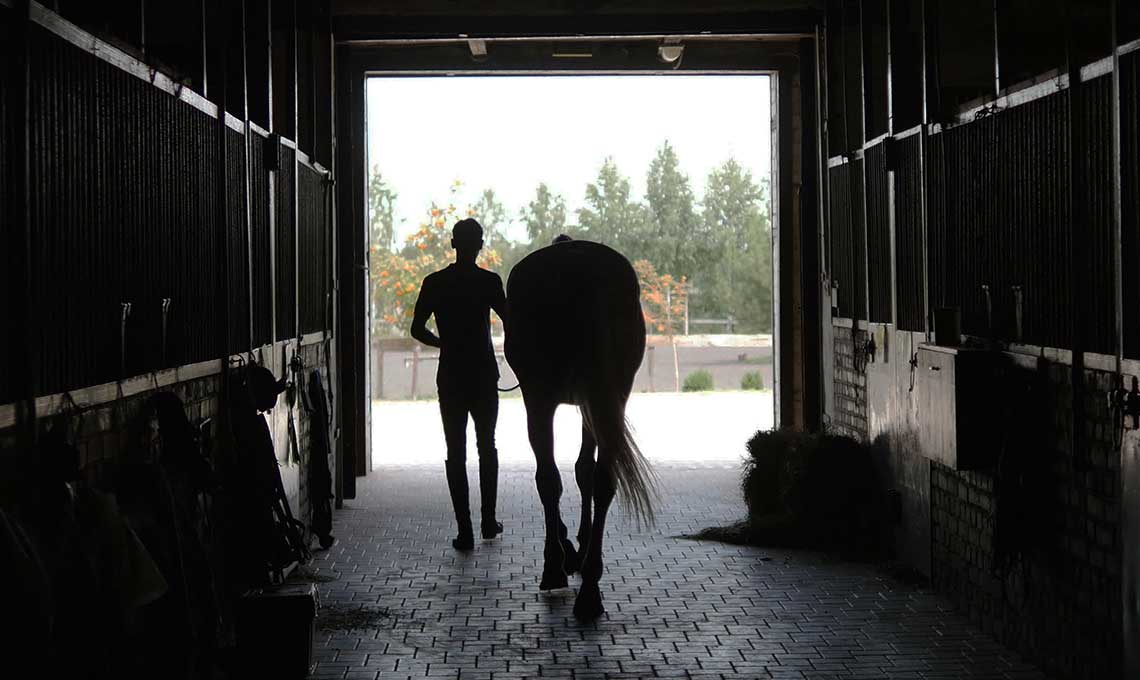 Review of the 9th EEHNC Congress

The 9th European Equine Health & Nutrition Congress took place from the 15th to the 17th of February at the Utrecht University, in the Netherlands. This conference gathered together scientists, vets and horse feed manufacturers. We’ve selected some of the papers and have summarized them in this Newsletter.

What is equine asthma?
How can we limit dust in the stable?

This oral presentation was given by Cornélie Westermann, from the Faculty of Veterinary Medicine at Utrecht University. Asthma can be mild or severe in the horse. The horse’s respiratory system is very sensitive to dust which can be found in stable air, such as that formed by fungi, moulds, endotoxins, beta-glucans, ultra-fine particles, microorganisms, mite debris, vegetative debris, inorganic dust and noxious gases.

Thus, present in number, these dusts induce inflammation of the airways which is expressed, whilst the horse is young, by mild asthma.
If the horse’s environment is not modified, the asthmatic symptoms will worsen and become severe, which can make physical exercise impossible for the horse. However, if air quality is improved, the disease can completely disappear (if it’s mild), or be improved (if it’s severe).

In addition to treatments prescribed by your veterinary surgeon, it is important to take steps in order to improve the air quality of the environment within which the horse lives.

It’s recommended, climatic conditions permitting, to leave the horse out at grass. However, a trampled paddock, without grass, and thus very dusty in dry weather is to be avoided.
If the horse needs stabling, a bed of wood shavings (dust free) will be a lot less dusty than straw. It’s also important to remove horses from stables whilst they’re being cleaned and whilst putting out forage to restrict the inhalation of dust produced by these activities.
The stable/barn should have adequate ventilation, whether by natural or mechanical means. It is also recommended to avoid peaks of high temperature in the stable.

As regards to forage, it’s advisable to feed good quality haylage (without mould nor dust), or to soak (15-30 min) or steam (for example with the help of a Haygain machine) hay.
Feeding forage on the floor rather than from a haynet is also recommended, because this produces less dust. Finally, bedding and forage should not stored in buildings where horses live.

Liver diseases in the horse:
What are the causes?
What are the symptoms?
Are there supplements to help a horse with liver failure?

This oral presentation was given by Professor Bruce McGorum, from the University of Edinburgh.

The liver is a significant organ in the body: it plays a role in metabolism, the production and storage of glucose, the synthesis of blood proteins, the storage of fat-soluble vitamins(A, D, E, K) and minerals(iron, copper, selenium) as well as the detoxification of, in particular, mycotoxins from the body.

In the beginning, the early signs of hepatic disease are difficult to identify (such as loss of appetite and weight loss). In the main, acute symptoms are shown when the state of liver is already highly altered. They can be : a stomach rupture due to accumulation of solid matter (sometimes without warning signs), encephalopathy (the horse becomes weak, has muscle spasms, his movements lose their coordination),jaundice, an interference in blood clotting/coagulation or even colic.

Hepatotoxic plants.Senecio, lupines, Heliotropium, Echium, comfrey, Crotalairia, plants belonging to the Trichodesma species, fiddlenecks Cynoglossum, Panicum, Trifolium hybridum (Alsike clover) and (red clover) are amongst plants that may induce hepatotoxicity.
A large number of them contain molecules that are toxic for the liver, pyrrollizidine alkaloids, with Senecio the most frequently implicated in hepatic diseases in Europe. In the main Senecio are not consumed by horses, except when there nothing else left to eat. However, during periods of drought or frost, or when cut and left to dry in the field, their taste alters and they will be eaten by horses, even if other sources of feed are available in the field. Finally, cutting and drying the plant does not remove its’ toxicity. Thus hay polluted by Senecio may prove to be toxic. Every part of Senecio contains alkaloids, and especially during flowering. Because they are accumulated in the body, the toxicity most typically seen is when there is persistent consumption. The early symptoms of ragwort (Senecio jacobaea) poisoning are loss of appetite and weight-loss. However they are difficult to evaluate, and in general, the symptoms of liver failure finally appear and can prove to be fatal.

Mycotoxins.
The most studied mycotoxins are fumonisin B1, sterigmatocystin and aflatoxins. They may be found in forage, but equally in poorly stored cereals or in certain pastures (notably in the case of fescues infected by endophytic fungi). It should be noted that fescue alkaloids also interfere in breeding from mares: abortions, or lengthened pregnancies, dystocia (difficult births), placental retentions, dysmaturity of foals, and lower milk production.

Iron overload.
Animals do not have an efficient system to eliminate iron from the body, and only small amounts are lost through sweating, intestinal cells, the skin, cells in the urinary system and in case of blood loss.
Excess iron in the liver can be a consequence of a liver disease interfering with intestinal absorption of iron, or even a dietary overload of iron. In the foal, it has been shown that a single 64mg dose of ferrous fumarate (iron salt) caused fatal liver failure. Certain water sources also be polluted with iron and prove to be toxic when horses drink from them. In addition, the accumulation of iron in the liver aggravates existing hepatic disorders (as a result of oxidative stress and inflammation). Excess iron can also lead to metabolic disturbances in the horse, rendering him insensitive to insulin for example.

Hyperlipaemia.
Hyperlipaemia is a typical cause of liver failure especially in ponies, miniature horses and donkeys, notably following significant weight loss, as well as in horses suffering from Cushing’s disease. Hyperlipaemia is characterized by an excessive quantity of lipids in the blood.

FEEDING THE HORSE SUFFERING FROM A LIVER DISEASE

The main nutritional support for a horse suffering from a liver disease is:

The effectiveness of feed supplements such as vitamin E, S-adenosyl methionine (SAMe) and silymarin (milk thistle extract, especially as the oral bioavailability in the horse is very low, <1%) has not yet been proven in the horse.
In ponies suffering from ragwort poisoning, supplementing with cysteine, butylated hydroxyanisole, vitamin B12 (200μg/kg of feed) and vitamin B9 (5mg/kg of feed) has not shown to be effective.

Finally, the use of charcoal and rock powders (such as montmorillonite), which have significant mycotoxin absorption capacities, has shown effectiveness in other farm animals, but it has never been tested in the horse. Due to their ability to also bind with essential nutriments, administering them continuously on a preventative basis is not recommended.

What effects does the overnutrition of the mare have on her fertility and the development of the embryo?

This study was undertaken by a team of researchers at the University of Utrecht and was presented by a member of the team, Marta de Ruijter-Villani. The objective of this research was to see if overnutrition with a fat rich diet, leading to obesity at the time of insemination altered mare fertility and the early development of the embryo.

To do this, the authors overfed 12 Shetland pony mares, they were given 200% of recommended intakes for 3 years. In order to find out if the effects of the overnutrition on the embryo were reversible, they were transferred from the obese dams to normal mares and vice versa.

The results, the over-nourished mares showed a longer annual cyclicity period than mares fed normally (+97 days). This is classically observed in obese mares. Despite this lengthening of the breeding season, the number of embryos produced each cycle, as well as the success rate of embryo transfers were not modified by the overnutrition. However, a greater number of embryos from the obese mares were aborted than embryos from normal mares, and this regardless of the recipient mare.

The authors also showed that embryos stemming from overfed mares stored higher levels of lipids than those stemming from normally fed mares. This may therefore affect their survival and explain the higher number of abortions.

The influence of supplementing with live yeasts in trotters in training

It has already been demonstrated that supplementing horses with live yeasts (probiotics) improves the digestibility of fibres and therefore can increase the value of forage This research was carried out by Dr Claire Leleu and the company, Phileo Lesaffre.

The aim of this work was to study the effect of supplementing with live yeast on blood parameters, body condition and the intestinal microbiota of young trotters in training.
For this, twenty-eight 2 year old French Trotters in training were followed for 90 days. Half of the animals (n=13) received a live yeast (Saccharomyces cerevisiae) based supplement for 90 days, whilst the other group (n=15) were not supplemented.

These results indicate that a live yeast based supplementation enables young horses to maintain their weight during training and improve their blood parameters. This study equally demonstrated an increase in the diversity of the intestinal microbiota per horse, knowing that a wider bacterial diversity is associated with better health and higher resistance to pathogens.