A molecule of reserve energy found in green plants, and stored in its organs of storage (seeds, roots, tubers, rhizomes and certain fruits) that allow the plant to survive during the dormant season. It is one of the principle calorie sources for the human species (cereals, etc.).

Furthermore, it is the primary energy source of the horse during effort and exertion.

Table : The levels of starch and simple sugars found in cereals suitable for the horse. The levels found in the REVERDY range are given for comparison purposes only (Source: INRA, 2nd edition, 2004).

Starch is a versatile energy source for the athletic horse. In the small intestine it is split into units of glucose which are then passed into the bloodstream. It can be used in different ways:

Muscle glycogen is an important fuel:

Even though all starches are constituted of glucose chains, the way in which a molecule of starch is constructed varies greatly from one cereal to another (the ratio amylose*/amylopectin*, nature of the endosperm* etc.). This difference in the architecture of different types of starch has an important impact upon the way in which it will be digested in the small intestine of the horse.

*Amylopectine: Branched chain of glucose molecules. It makes up 70 to 85% of starch. It is the most digestible form of starch which is responsible for the gelatinisation.
*Amylose : Linear chain of glucose molecule taking a helical structure. It represents approximately 15 to 30% of starch composition knowing that the more amylose there is, the less the starch is digestible.
*Endosperm: Plant tissue that is a nutritive reserve containing carbohydrates (starch) and proteins. Along with the embryo (germ) it makes up the centre of the seeds.

Amongst all the most commonly fed cereals to horses, oats contain the most digestible form of starch followed closely by wheat, then comes barley and maize..
The digestibility of the starch contained in the latter depends on the variety of maize used (cf. the graph). Late varieties (dent maize) which are majoritarian in animal nutrition and used in our feeds, contains a more digestible form of starch than early varieties (flint maize). Furthermore, varieties containing a starch poor in amylose have greater digestibility. Thus, the Waxy variety of maize whose amylose content is close to 0% presents superior digestibility to starch from dent maize varieties which contain on average 25% amylose. Associated with flaking, Waxy maize provides very digestible starch. 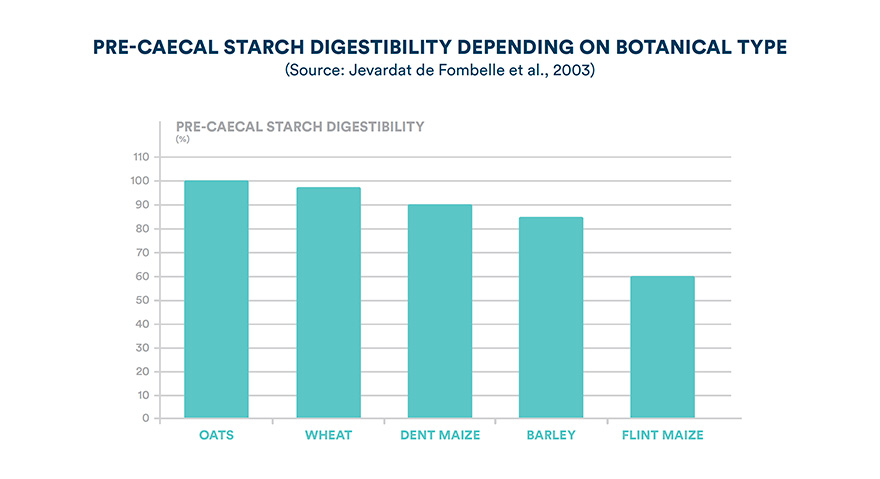 We are able to distinguish many types:

Their objective is to increase starch digestibility in the treated cereals.. They are above all of interest in cereals possessing less digestible starch (maize and barley). Oat and wheat starch being already very digestible, technological treatments have little effect on their pre-caecal* digestibility.
*Pre-caecal: The parts of the digestive tube situated before the caecum (large intestine) = the stomach and small intestine

Flaking is commonly employed in horse nutrition, it corresponds to a flattening and a steam cooking which leads to hydration and a partial predigesting of the starch = gelatinisation. In the case of maize starch, flaking significantly increases its digestibility and therefore its glycaemic index (cf. graph), a parameter that we shall now examine. 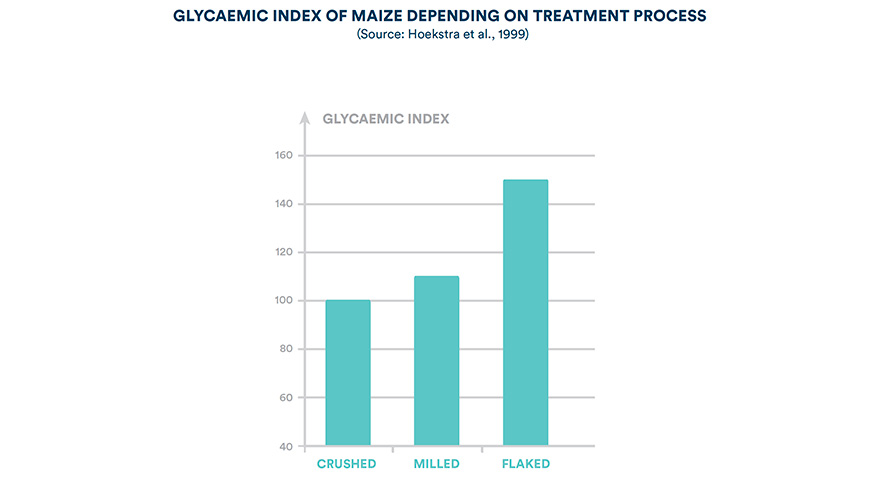 A system used to classify food stuffs according to their effect on the glycaemia.
Created by Canadian scientists at the beginning of the 1980’s, it compares the exact quantity of carbohydrates available in each food, providing a numeric index based upon the glycaemia after a meal. Initially development for human use, it has since been modified and recognised as being reliable for horses.

From a practical point of view, it characterises the enzymatic digestibility of a carbohydrate source in the small intestine: 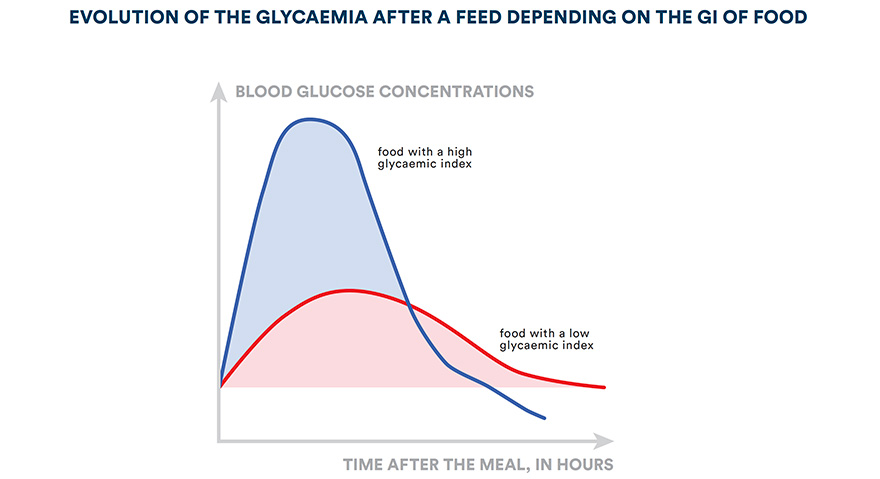 The glycaemic response and the health of the horse

The digestive system of the horse is adapted to having many small meals throughout the day; this corresponds to a life of grazing and browsing in a field. This type of diet leads to low glycaemic responses, even more so if the ingested foods have low glycaemic indexes (forage etc.).

Furthermore, a very low glycaemic response is supposed to bring about a very low demand for insulin, so resulting in a better long term stability of the glycaemia. Thus the risks of fluctuations in the glycaemia and insulinaemia are diminished.

Pathological states related to / or aggravated by high glycaemic indexes

The increase of the glycaemia following a meal leads to insulin being secreted into the blood, this hormone allows glucose to enter cells in order for it to be either used, or stored in the form of glycogen in the muscles and liver. Simplistically, one would think that the greater the digestibility of the starch, the better it is for the horse. However, in the case of starch, the adjective “digestible” is synonymous with “fermentable”. Indeed, a starch easily digested in the small intestine is likely to be more easily fermented by the microorganisms (lactic flora) of the stomach. Secondly, “digestible” says high glycaemic index.

Thus, a ration with a high GI index is likely to lead to metabolic and digestive disturbances with more or less serious short and long-term consequences. The most frequent are summed up below :

ABOUT WHEAT…
Including wheat in the diet of horses is not desirable for numerous reasons:
Firstly, as explained by R.WOLTER (1999) “wheat, more than any other cereal, risks forming doughy lumps in the digestive tract because of its’ richness in gluten” that is to say to obstruct the digestive tract (choke, oesophagus obstruction). Furthermore wheat grains contain an important quantity of very fermentable starch (common wheat starch = 60.5% crude starch INRA 2004), very degradable and so equally easily digested by the enzymes of the horse.
Consequently, its incorporation into equine feeds is likely to modify different points of the digestion and metabolism of carbohydrates:
- On one hand, it may result in an increase in gastric fermentations (microbial). these can be at the origin of painful distensions of the stomach through the large liberation of gases. Simultaneously the flora will produce an important quantity of lactic acid responsible for the appearance or aggravation of stomach ulcers.
- On the other, the high digestibility of wheat starch leads to a large production of insulin which can be a cause of harmful disruptions to the horse: behavioural problems (excitement), muscle metabolism (tying-up) and osteoarticular problems (perturbed growth) etc…

For these reasons, we have chosen not to use this cereal. 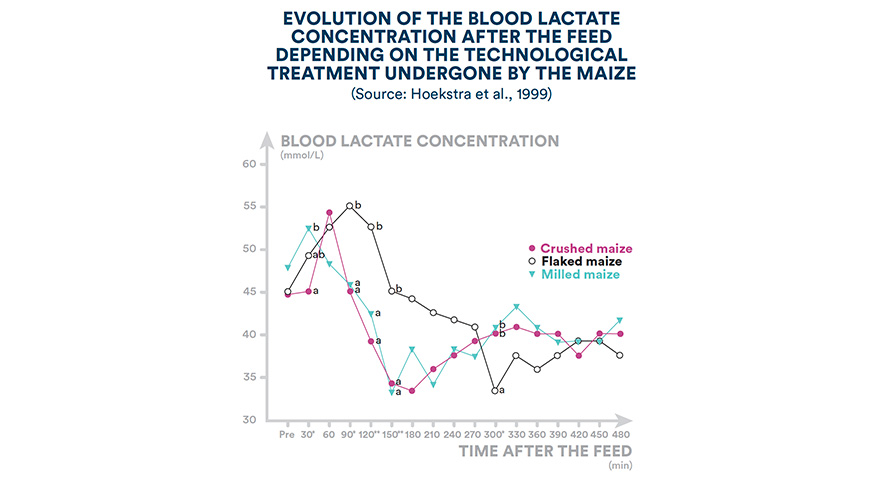 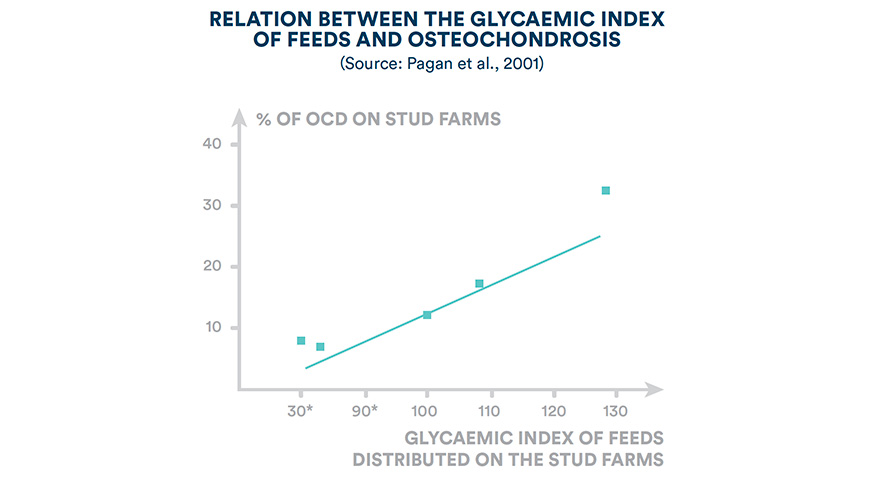 … AND FLAKED CEREALS
Flaking is a thermo mechanical procedure in a humid environment which significantly increases the digestibility and therefore the glycaemic index of cereals.Consequently, and even if it is « the dose that poisons », we advise against the use of flaked cereals for breeding, in particular in the broodmare at the end of gestation and for the foal under the mother. We equally advise against their use in horses that suffer from the aforementioned pathological states: excess fat, behavioural problems, chronic myopathies, gastric ulcers, Cushing’s disease, equine metabolic syndrome and laminitis.
Flaked cereals do have their interest for specific uses. Indeed, it is recommended to use them (in moderation) if we wish to:
- Facilitate the digestion of starch because of: insufficient enzymatic secretions in the senior horse.
Improve body condition : recover condition following a weight loss, preparation for the sale ring.

The amount of starch in a feed per kg means nothing : it is essential to take into consideration the quantity distributed at each feed and also the digestibility of the starch used.

Then, it is preferable to distribute a diet composed essentially from forage because the low glycaemic index carries a lower risk of disrupting the regulation of the glycaemia and thus the health of the horse.

However, in the athletic horse, energy requirements being up to twice those of a horse at rest and knowing that the synthesis of glycogen is favoured by the appearance of sufficient glycaemic and insulin responses, resorting to cereals that have a higher glycaemic index seems inevitable.

To do this, giving a concentrate feed that associates, whilst respecting quantity recommendations, forms of “slow” starch (barley, maize) with a greater or smaller portion of digestible starch (oats, flaked maize, etc.), seems to be the best compromise in the healthy horse whose energy requirements are unable to be entirely fulfilled by forage.