The interest of hay steamers in preventing and managing respiratory diseases

The horse,
an animal sensitive to bacteria, mould and dust present in conserved forage

A healthy adult horse weighing 500 kg consumes about 10 to 13 kg dry matter (DM) a day, of which, 2/3 should be forage (necessary to cover daily requirements in fibres). Thus, a stabled horse in work must eat 8 to 10 kg of hay a day.
In addition to being beneficial to the digestive system (buffer effect in the stomach, bulk to favour a healthy transit and maintain a beneficial digestive flora) and important to the mental well being (occupation), hay represents a non negligible energy source.

Nevertheless, bad quality hay is likely to lead to various health problems in the horse, notably in the respiratory system (source 1).
Indeed, inhalation of dust from hay containing bacterial endotoxins, fungal spores, dust mites, pollens and other inorganic debris, can be at the root of hypersensitivity reactions, that is to say an exaggerated immune response towards these foreign substances, able to induce tissues and inflammatory lesions in the respiratory tract.

In the horse, we principally observe two types (source 2):

In the athletic horse, disturbance of gaseous exchanges in the lungs and in particular, of the pulmonary alveoli, is one of the major causes (along with locomotive problems) of poor performance.
Thus, it is primordial to accord great importance to the sanitary quality of forage, more so considering the majority of horses in work live in the confined atmosphere of their stable.

To reduce dust, hay is often soaked. However, this technique can have undesirable effects (changes in nutritive values and palatability) and does nothing to improve the sanitary quality of hay. Indeed, it is preferable to resort to the use of forage purifiers such as those proposed by the HAYGAIN company. 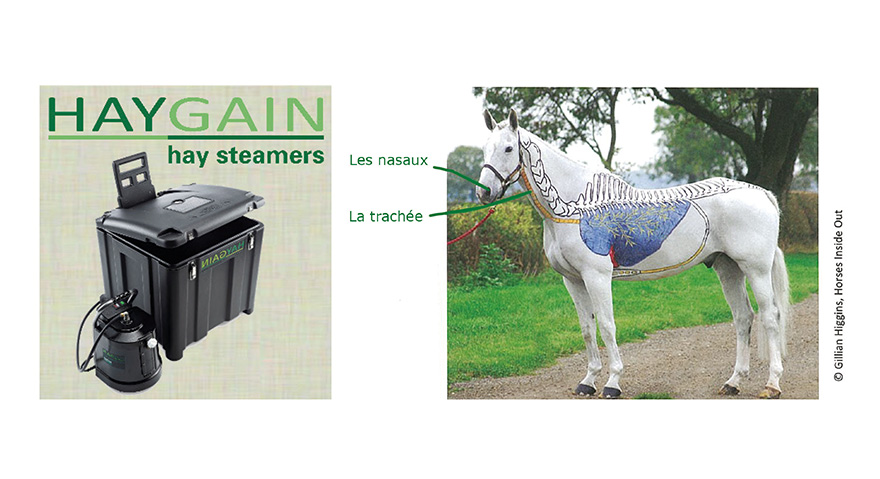 HAYGAIN hay steamers are made up of different components: 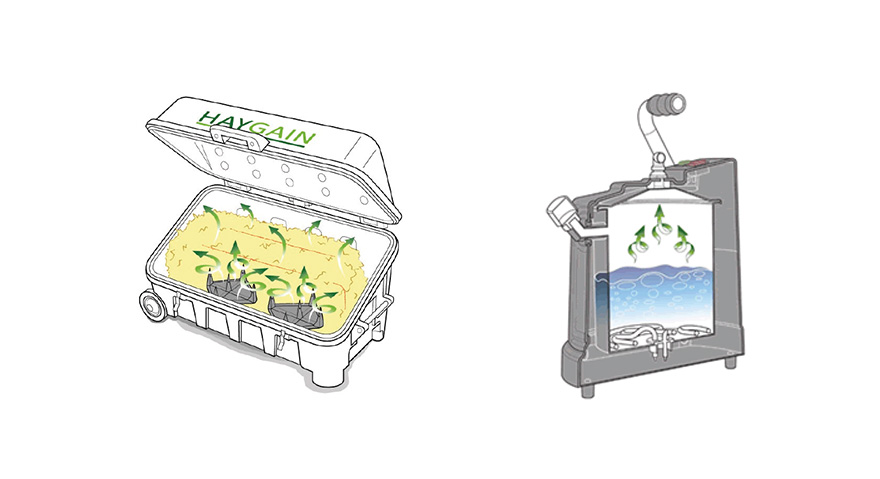 A steam cycle lasts about 50 minutes. There is minimal condensation due to the thermal efficiency of this procedure making the HAYGAIN easy to maintain (source 3).

HAYGAIN is available in three models, each with a smaller or larger capacity. They are all guaranteed for a year. 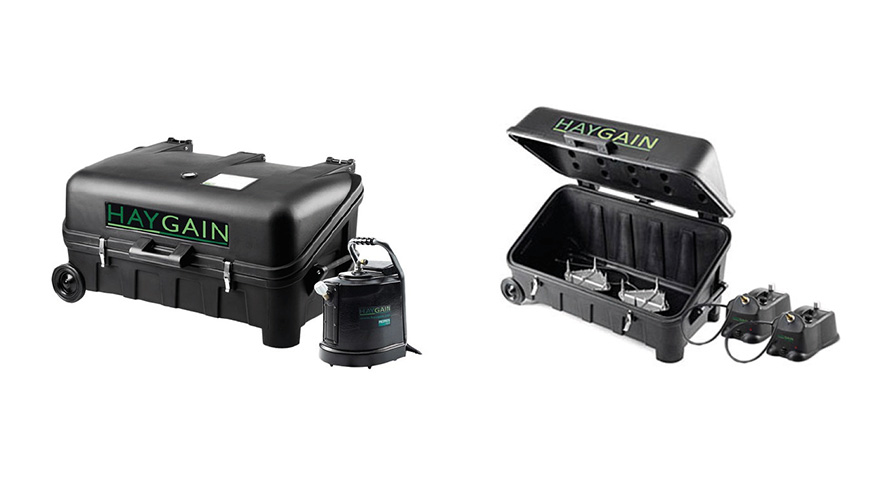 For the user, operating is simple. Follow these steps:

A solution in the prevention and management of respiratory diseases

Hay can be dusty, that is to say contains high levels of breathable particles, for many different reasons: baling whilst moist, leading to heating during storage, cut too short, inclusion of soil particles (earth etc.), cut late, containing plants in flower, presence of mould, so containing spores, etc.

The effect of the HAYGAIN steaming process on the number of breathable particles (diameter inferior of 5 μm) has been studied (source 4).

8 hay samples were taken from four different zones in Great Britain (GB). Each sample was divided into three and each part treated differently:

Each of the 5 kg samples was vigorously shaken in a rotating agitator for 3 minutes.

Treating hay with a HAYGAIN is an effective method to reduce the number of breathable particles (diameter inferior of 5 μm) for at least 24 hours after steaming.

The effectiveness of HAYGAIN hay steamers on the total number of bacteria, yeast and mould, has also been studied (source 5).

A count of microbial colonies was carried out on samples from hay bales from 5 different regions of GB.
Each sample was divided into two: one part treated by the HAYGAIN 1000 steamer for 50 minutes, whilst the other was not and represented the control sample. Colony numbers were counted in each sample, whether treated or not by the hay steamer.

After steaming in the HAYGAIN 1000, bacterial contamination was reduced on average by 86% and no yeast or fungal colonies were detectable.

A second experiment led in 2012 confirmed these results. It showed that steaming hay using a HAYGAIN 600 (a smaller model) led to a 99% reduction in bacterial and mould colonies (source 6).

A similar experiment was carried out on haylage (source 7).
In general, this type of forage has better nutritional values and lower dust levels than hay. However, because of higher humidity, haylage must be rapidly consumed after opening (on average within 5 days). In fact, once the protective film is removed, contact with air, and in particular oxygen, leads to the rapid development of bacteria and mould.

5 bales of rye-grass haylage were randomly chosen on an English farm.
Each bale was divided into 4 equal parts:

After steaming, analysis carried out the same day showed 99% reduction in the number of microbial colonies (bacteria and mould) compared to the non-steamed sample. After 4 days exposure to air, the haylage treated by the HAYGAIN 600 still showed a 99% reduction in bacterial colonies and 70% in mould, which remains satisfactory.
On the other hand, analysis carried out 4 days after opening on the non-steamed haylage sample showed an important increase in the number of microbial colonies (x2.75 for bacteria and x6.5 for fungus).

All the results are presented in the graphs below (7).

CONCLUSION OF EXPERIMENTS 1 AND 2

Treating forage by HAYGAIN permits a near complete elimination of bacteria and mould.

Indeed it seems logical to think that the use of HAYGAIN machines should limit the onset of respiratory problems due to allergens in hay, notably in those horses suffering from chronic problems such as “heaves” or “emphysema”.

To validate this hypothesis, a study was led in 2012 on 6 horses suffering from RAO (source 8).

6 horses suffering from RAO but in remission (attenuated symptoms) were divided into two groups: a control group fed on ad-lib standard lucerne hay and a group eating the same hay steamed in a HAYGAIN 1000.
During the 10 days study, the horses underwent different examinations:

Horses consuming non steamed hay showed an aggravation of the clinical symptoms of RAO between the first and 10th day of the experiment, whilst the parameters of the horses eating steamed hay remained unchanged during the study.

In addition to being useful in prevention, HAYGAIN hay steamers allow effective management of horses suffering from respiratory diseases, notably reoccurring forms such as RAO.

Soaking hay induces a drop in nutritional quality.
Regarding treatment by HAYGAIN, a study was carried out on 30 hay bales (source 9).

2 samples were extracted from each bale, taking each time hay from 5 different places in the bale. One sample from each bale underwent steaming treatment in the HAYGAIN. Then, each sample, whether it had been treated in the HAYGAIN or not, was analysed in order to establish nutrient levels.

No significant difference was found in calcium, magnesium, sodium, phosphorus, copper, manganese and iron. Levels of nitrogen, potassium and zinc were slightly increased. Only the level of soluble sugars decreased by 2.3%. This small decrease can be considered beneficial as very high levels of sugar in hay are harmful for horses (risk of laminitis, obesity, etc.)

Treatment with the HAYGAIN does not alter nutritive values in forage.

Steam treatments increase the digestibility of forage. Therefore, the evolution of forage degradability after treatment by HAYGAIN has been studied in vitro.

6 hay samples were collected. Three of them underwent steaming in the HAYGAIN for 50 minutes (source 10). The 6 samples were then fermented in vitro using horse faeces as microbiological inoculum.
After an incubation period of 65 hours at 37°C, the volume and pressure of gas was measured.

No significant difference between the samples was found whether treated or not by the HAYGAIN.

The steaming procedure does not improve forage digestibility.

In order to study the palatability of hay after steaming, a study was undertaken in 6 ponies (source 11).

1 kg of each sample was given to the ponies for an hour: The hay was placed on the ground at three different positions in the stable, the ponies also had water available. In order to eliminate any positional preferences the experiment was repeated three times for each pony, changing the position of the hay samples every time. The amount of dry matter consumed during an hour as well as the first choice of forage to be consumed during the first five minutes were recorded.

Hay treated by HAYGAIN is consumed in significantly larger quantity than the two other samples, and is eaten first by the ponies during the first five minutes. 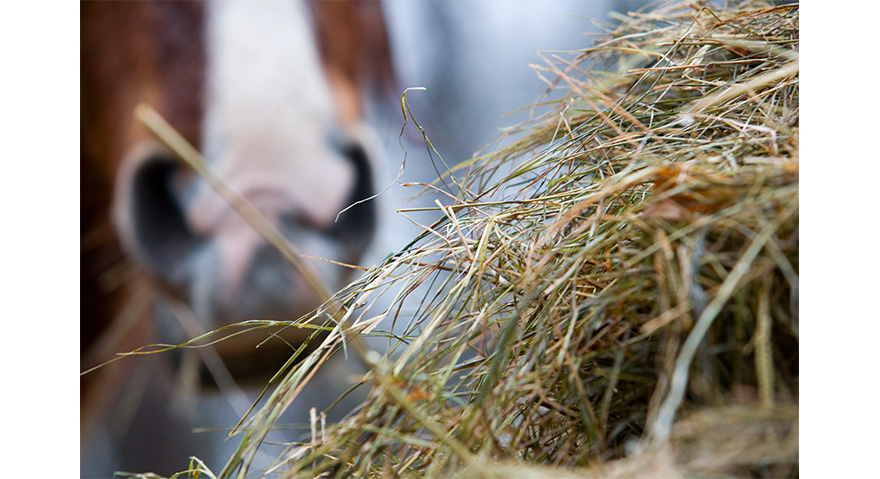 Different scientific studies carried out on HAYGAIN hay steamers have proven that these machines reduce the number of breathable particles in hay, and also destroy bacteria, mould spores and dust mites in dehydrated or wrapped forage.
Thus, thanks to the easily and simply operated steaming system, we obtain clean, dust free, rehydrated and palatable hay, whilst conserving nutritional qualities. The interest of these machines in preventing and managing respiratory diseases related to forage allergens is therefore evident. Consequently, knowing that respiratory diseases represent a major cause of poor performance and are favoured by stabling, daily treatment of forage by HAYGAIN hay steamers is recommended, for predisposed horses at the very least.

(4) Stockdale, C and Moore-Colyer, M.J.S (2010) Steaming hay for horses: The effect of three different treatments on the respirable particle numbers in hay treated in the Haygain steamer. European Workshop for Equine Nutrition, Cirencester, Sept 2010. The Impact of nutrition on the health and welfare of horses. EAAP publication No. 128. Ed Ellis, A., Longland, A.C., Coenen, M and Miraglia, N. p 136-138

(5) James, R. and Moore-Colyer, M.J.S. (2010) The effect of steam treatment on the total viable count, mould and yeast numbers in hay using the Haygain steamer European Workshop for Equine Nutrition, Cirencester, Sept 2010. The Impact of nutrition on the health and welfare of horses. EAAP publication No. 128. Ed Ellis, A., Longland, A.C., Coenen, M and Miraglia, N.p 128-132

(10) In vitro fermentation of dry hay and hay steamed for 50 minutes in the HG1000 Haygain steamer.