A source of beta-carotene, protected vitamins and chelated trace elements.

Skip to the end of the images gallery 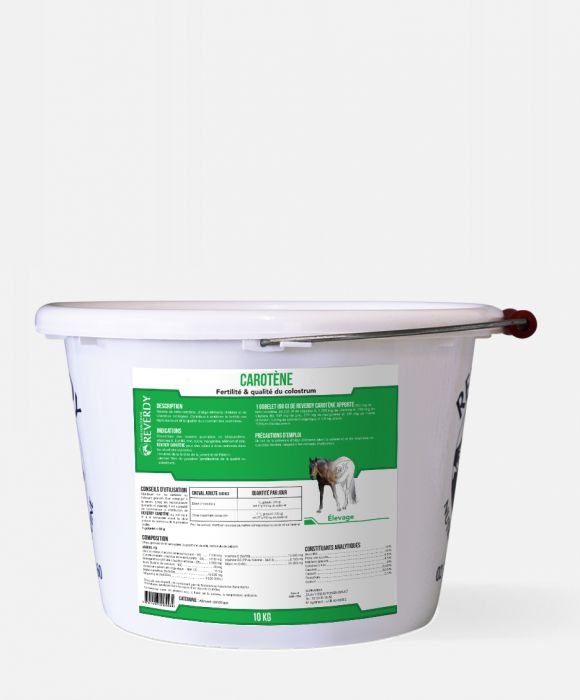 Skip to the beginning of the images gallery

A source of beta-carotene, protected vitamins and chelated trace elements.
Contributes to the improvement of fertility in breeding stock and colostrum quality in broodmares.

In breeding stock (mares and stallions), we advise starting REVERDY CAROTENE at least 6 to 8 weeks before the first service.

For ponies, administer a daily dose in proportion to the animal’s liveweight.

Non doping product without Prohibited Natural Feed Substances (analysed within the framework of a control scheme).

In the stallion, beta-carotene participates (as a precursor of vitamin A) in the synthesis of testosterone. It assures correct production and maturity of spermatozoa. Thanks to its' antioxidant action, it helps protect spermatozoa from attack by free radicals.

Vitamin A affects protein synthesis with consequences on epithelium integrity in the reproductive system, the production of sexual hormones and immunity.

Vitamin E and organic selenium reinforce the antioxidant action of beta-carotene. Furthermore, supplementing with them allows an increase in colostrum antibody concentrations (IgG and IgM) as well as the quantity of colostrum produced, thus leading to a better transfer of immunity from the mare to the foal.

Zinc can play a part in reproduction as an essential activator of sexual hormone production enzymes, and also in its' function of transporting vitamin A.

Supplementing with copper would seem to improve the liberation of sexual hormones (FSH and LH) at a cerebral level (pituitary).

Manganese and vitamin B3 intervene in the production of sexual hormones.

Iodine is essential for synthesising thyroid hormones that stimulate FSH and LH production by the pituitary gland.

Due to the presence of high levels of vitamins and trace elements (including selenium) contained in this product, respect the recommendations.

Store in a dry place, away from light, at room temperature.

A source of beta-carotene, protected vitamins and chelated trace elements.

An association of probiotics and postbiotics. Supports the horse’s intestinal flora and improves the digestibility of the feed ration.

Pelleted feed for youngstock and broodmares.