Selenium is a key nutrient in horse nutrition and is crucial for an optimal antioxidant status and immune function. Trials done with a certain type of selenium fed to mares showed that it affects milk and selenium status of their foals.

I. What is the role of selenium in horses?

I. What is the role of selenium in horses?

The supplemented selenium can be either inorganic (often sodium selenite) or organic (selenised yeasts or selenomethionine).

Recently, the efficacy of 2 sources of selenium was evaluated in mares, during gestation and lactation. The 2 sources, sodium selenite and selenomethionine, were investigated in their potential to affect the selenium concentration in the milk and the selenium status of the foals.
In the last 3 months of the gestation and first month of lactation, 16 mares were randomly divided into 2 groups:

After 3 months, plasmatic selenium and gluthation peroxidase (GPX) increased as a result of selenium supplementation, independent of the source. Mean selenium concentration in the colostrum was numerically higher in mares receiving the organic selenium source and reached a significant difference in the milk at day 7 and 30 after foaling (Figure 1). 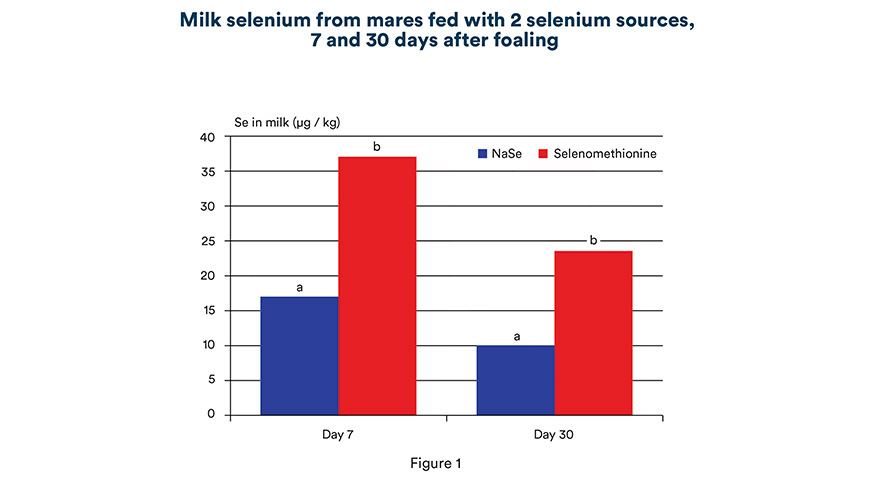 Higher selenium levels in the milk resulted in an improved selenium and antioxidant status of one-month old foals (Figure 2). 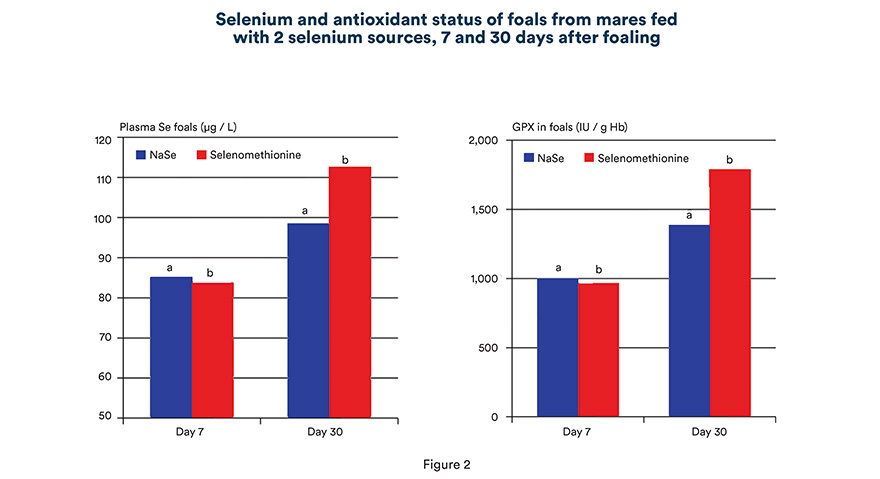 One of the other selenoproteins in the body is iodothyronine deiodinase, a selenoenzyme responsible for the conversion of the pro-hormone T4 to its active form T3.
These thyroid hormones play a key role in the metabolism for protein synthesis and energy production in the body.

In young horses, some research has been carried out on the effect of glucose on T3 and T4, but there is very limited research available about the influence of selenium on the T3/T4 ratio. In the trial with mares and foals, the T3/T4 ratio was measured in foals at 7 and 30 days of age. At 7 days, the ratio T3/T4 was equal in foals from both groups. After drinking milk with higher selenium levels, the foals from the mares receiving selenomethionine, showed an increased serum triiodothyronine to thyroxine (T3/T4) ratio but this level was not significant.

In further research, it would be interesting to investigate if this increase in T3/T4 ratio would have a significant effect in the long term.

Osteocalcin and bone specific alkaline phosphatase (bone-ALP) are markers for the bone formation in young animals.

Although the osteocalcin levels were not different in foals at 30 days of age, bone-ALP was significantly higher in the foals from the mares fed with selenomethionine.

c. Selenium in the metabolism

In the animal metabolism there is a difference between selenomethionine and all other forms of selenium. All selenium compounds are recognised for the supply of selenium and all can be used for selenoproteins (selenoenzymes) synthesis.

Beside this general pathway, selenomethionine is utilised in the body as an amino acid and can be built into body proteins instead of methionine. Via this specific pathway, selenomethionine is able to build up selenium reserves in the body and is able to transfer selenium to the offspring through colostrum and milk.
The selenium reserve can be mobilised for later selenoprotein synthesis. An adequate selenium reserve ensures an optimal selenium and antioxidant status at all times, even in times of stress or low feed intake. The beneficial effect of higher milk selenium is shown in the horse trial discussed above. 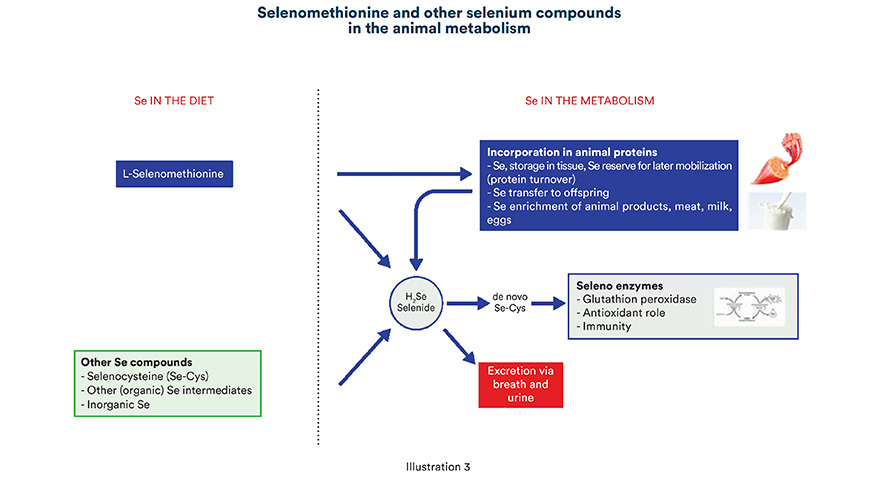 ✅ Compared to inorganic sodium selenite, supplementation of mares with selenomethionine improved selenium and antioxidant status of their foals and seems to have a positive influence on bone development.

The difference is in the concentration of selenomethionine in the product.

In the metabolism selenocysteine and other (organic) selenium intermediates are reduced to hydrogen selenide and then utilised for the novo-selenocysteine and seleno-enzyme biosynthesis. Thus, the remaining part of selenium in selenised yeast (<37%) follows the same pathway as inorganic sodium selenite. The differences in selenomethionine content is also seen in other animal research. The new generation of selenomethionine fed to dairy cattle resulted in higher milk selenium compared to selenised yeast and both organic sources outperform sodium selenite. L-selenomethionine is considered as metabolically effective organic selenium.

Selenomethionine is an effective organic form of selenium to increase selenium levels in the milk of horses. Higher transfer of selenium through the milk results in improved selenium and antioxidant status of the suckling foals.. Additionally, higher selenium status seems to have a positive effect on the bone metabolism in growing offspring.