Flaked cereals in the horse's diet... good or bad?

REVERDY feeds are presented in pellet form (with the exception of ranges aimed at horses in work with high energy requirements to which we add some aked maize). Pellets ensure better keeping qualities and a uniform distribution of ingredients. This allows a guarantee of stability, homogeneity and balance.

I. Cereals as an energy source

IV. What about molasses?

I. Cereals as an energy source

The horse is a herbivore, we cannot repeat this enough. The horse’s large intestine contains a microbial flora that will ferment the fibres that he ingests, providing him with a large part of all his energy requirements. Fibre is essential for the horse. When the horse’s energy requirements increase and forage alone is no longer sufficient, cereals can be introduced to provide additional energy.

It is due to the starch they contain that these cereals are an interesting caloric ressource for providing energy to the horse during exercise. This starch is made up of several glucose molecules, the structure of which differs from one cereal to another.

⏩ To know more about starch.

Among the most commonly used cereals, oats contain the most digestible form of starch, closely followed by wheat*, then come barley and maize.

*As explained by R. WOLTER (1999), « wheat is more likely than other cereals to form dough balls in the digestive tract due to its high gluten content », that is to say, to obstruct the horse’s digestive tract (oesophageal blockage, (choke) etc.). Furthermore, wheat grain contains a large quantity of starch (Soft wheat: Crude starch = 60.5% INRA, 2004) which is highly fermentable, implying that it is easily broken down and there- fore also easily digested by the horse.

In order to increase the digestibility of the starch, cereals undergo technological treatments. This is especially the case for less digestible starch such as that found in barley and maize. The technological treatment can be mechanical (grinding, flattening (rolling), crushing), thermal (toasting, expansion, extrusion) and thermo-mechanical (flaking and to a lesser extent granulation)

Flaking, which is ever-present in both human and equine food, consists of flattening and cooking cereals by steaming. This leads to a hydration and partial predigestion of the starch (= gelatinisation). In the case of maize and barley starches, flaking significantly increases their digestibility and thus the glycaemic index.

The glycaemic index is a classification of foods according to their ability to raise the glycaemia (the level of glucose in the blood). 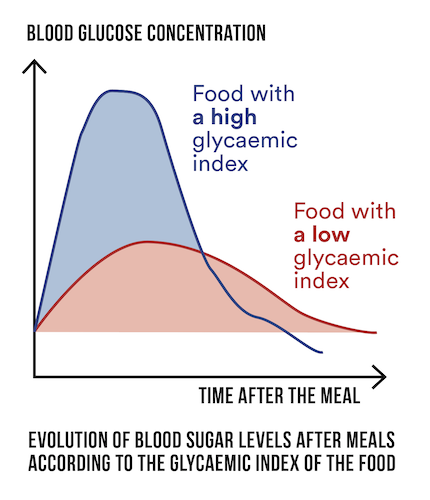 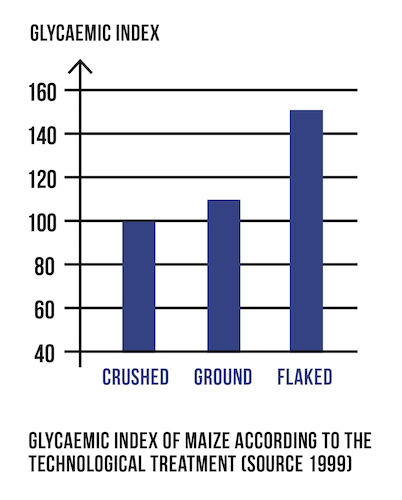 So for what reason is the glycaemic index important?

The horse in the wild has a digestive tract that is used to receiving small amounts of forage throughout the day. Therefore, he does not experience high glycaemic responses. Furthermore, a lower blood sugar response is thought to result in a lower demand for insulin, leading to better blood sugar regulation in the long term. Thus, the risk of disturbances to the glycaemia and insulinaemia is reduced.

So what risks do rations with a high glycaemic index such as flaked cereals carry?

The occurrence of a glycaemic response after a meal leads to the release of insulin into the blood. This hormone allows blood glucose levels to be lowered by bringing glucose into the cells in order for it to be used or stored as glycogen in the muscles and liver. However, depending on the size of the blood sugar peaks, their frequency and the individual’s sensitivity, disturbances to the healthy functioning of the body may be observed sooner or later.

The most common disturbances related to glycaemic peaks

❌ [FATTY OVERLOAD]
The higher the blood sugar peak, the more insulin is produced, and therefore the amount of sugar entering the cells is greater. In this case, some of the glucose cannot be stored as glycogen. It is therefore converted into fatty acids, which are then stored in the fat cells that make up the fatty tissue, distributed at various places in the body (under the skin, in the abdominal cavity, etc.). Thus, the higher the glycaemic index of a carbohydrate, the more likely it is to promote excess fat, which is undesirable in the majority cases.

❌ [NERVOUSNESS, BEHAVIOURAL PROBLEMS]
The production of insulin leads to an increase in the blood level of a neurotransmitter that affects behaviour: serotonin. The higher the glycaemic index of a carbohydrate, the greater the amount of insulin (and therefore serotonin) produced. It has been shown that an excess of serotonin in the brain manifests itself in mental and physical hyperactivity, disorganised behaviour and mood changes.

❌ [MYOPATHIES, TYING UP]
Depending on the different forms of myopathies, carbohydrates with a high glycaemic index are (in)directly related.

❌[GASTRIC HEALTH, ULCERS]
The more digestible a carbohydrate (high glycaemic index), the more likely it is to be fermented into organic acids (including lactic acid) by the micro-organisms in the stomach. Lactic acid being aggressive to the gastric mucosa, its production favours the appearance of gastric ulcers.

❌ [OCD, OSTEOCHONDROSIS]
It has been demonstrated that mares producing foals with OCD are statistically those that have shown high insulin production after feeds at the end of gestation. Indeed, it would seem that hyperinsulinaemia disrupts the correct development of cartilage cells by delaying their maturation. Consequently, the feeding of high glycaemic index carbohydrates to mares at the end of their pregnancy or to foals seems to be a predisposing factor.

❌ [METABOLIC DISTURBANCES]
Horses suffering from equine metabolic syndrome (EMS), or Cushing’s disease (PPID), exhibit hyperinsulinaemia associated with prolonged hyperglycaemia after feeding. This is because the body’s cells are less sensitive to insulin (insulin resistant), which limits the entry of glucose into the cells, resulting in prolonged hyperglycaemia. On the other hand, for the cells of the body that do not need insulin to absorb blood glucose (such as the cells that make up the blood micro-capillaries that allow the foot to be vascularised properly), hyperglycaemia results in an increase in the concentration of glucose inside these cells. Excess glucose is toxic to these cells and leads to their death, resulting in a lack of vascularisation in the foot, which is characterised bylaminitis. It is therefore logical to avoid feeding high glycaemic index carbohydrates, which would aggravate hyperinsulinaemia and hyperglycaemia, and therefore the health status of horses with insulin resistance.

“Digestible” therefore does not mean "better".

On the other hand, an excessive intake of starch that is difficult to digest (barley and maize without technological treatment) can lead to digestive acidosis in the large intestine (terminal/distal part of the digestive tract), with all the possible consequences: dull coat, weight loss, diarrhoea,colic, laminitis. The slow fermentation of the « insoluble (mainly cellulosic) fibres », provided by forage, contributes to maintaining the healthy functioning of the large intestine. A large part of energy requirements is covered by the volatile fatty acids produced by the « slowly fermentable fibres ».

IV. What about molasse?

The flakes commonly used in equine feeds often have molasses, a by-product of the sugar industry, added. In the production of certain pellets, molasses contributes to the increased efficiency of the pelleting machines/presses due to its binding and lubricating properties. In addition, molasses that coats the flakes, fibres, etc. in flaked feeds also contributes to the agglomeration of dust on the production line.

In both cases, by increasing the palatability of the food, molasses also makes it possible to mask the taste of unappetising and/ or poor quality raw ingredients. From a health point of view, this is not advisable.

Secondly, molasses is composed of fast-release sugars and therefore has a high glycaemic index, which makes it a potentially ulcerogenic ingredient, glycaemia disruptor, etc..

Feeding reasonable quantities of slowly digested starch forms (barley, maize) in combination with a higher or lower part of easily digestible starch (oats, maize flakes, etc.) seems to be the best compromise in the healthy horse whose energy requirements cannot be totally covered by a supply of forage.

This is the strategy we have chosen to adopt in the development of REVERDY feeds. This rationing method limits gastric fermentation, which can lead to the development of ulcers and disturbances in the metabolism of carbohydrates, with all the possible consequences upon the horse’s health. However, other parameters influence the fermentability/digestibility of a given starch: the time of day a feed is given, the size and frequency of meals, and even the fibre and fat content of the ration must all notably be taken into account.

The choice of raw ingredients entering into the composition of our feeds is above all based on their QUALITY and their SAFETY (as well as the absence of doping substances).

This approach is consistent with our desire to produce healthy feeds. Their primary objective is to provide the necessary nutrients to the horse throughout its life, in order to keep him in good health. In particular, by preserving its digestive microflora and by limiting as much as possible the production of metabolic waste (lactic acid, urea, etc.) which can affect the body (liver, kidneys, etc.). It should also be remembered that our feeds contain no molasses, no by-products and no GMOs (

The use of flakes is to be AVOIDED in pregnant broodmares and growing youngsters. For leisure and sport horses, the use of flakes is HIGHLY INADVISABLE, for all the reasons mentioned above. In the rare cases where flakes can be fed, this should be done sparingly and with a specific aim.